2010. My first spectacular Biking Birder adventure, a, gruelling at times, twelve month cycle around every wonderful part the UK, visiting every amazing RSPB nature reserve, each so individual and every incredible W&WT centre, whilst listing the many birds seen. 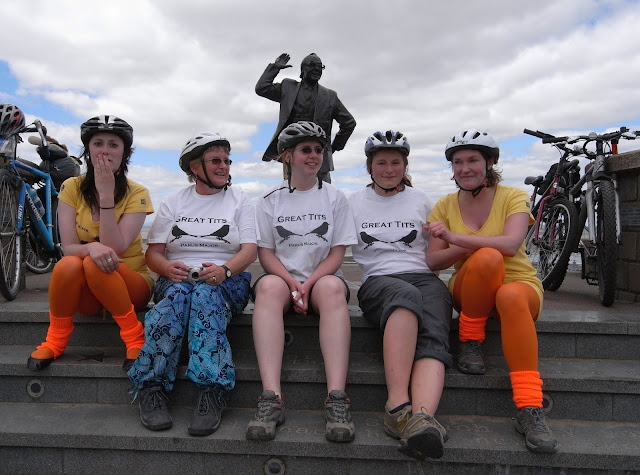 Stories of the fabulous 'sunshine' people met will come later.

So, in a series of posts where I delve deep into the memories I will retain forever of each Biking Birder adventure.

There is a book of this unforgettable year still to be published. One day it will be but before that important day, here is a sprinkling of momentous moments . . .

If you know the words, moisten your vocal chords and sing along now - and yes, Eels have given me permission to use their music!

And on a search

I've got a feeder for you to perch on

Did you spot the three mistakes?
Next year, as in 2010, I will be doing the BIGBY, the Big Green Big Year, to try and raise money for my favourite environmental charity, the RSPB.
To finish today's post, here is their beautiful and atmospheric Dawn Chorus video . . .
BCNU xx 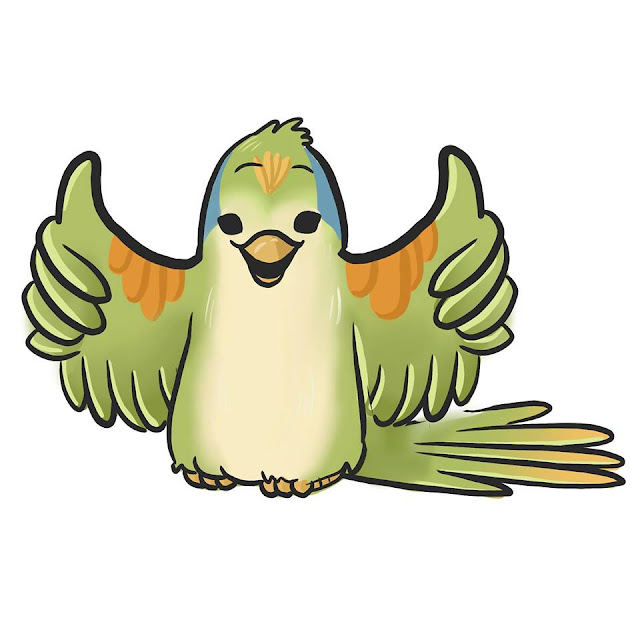 Posted by bikingbirder at 11:08 No comments:

Whilst enjoying going around the UK, visiting the RSPB nature reserves, I realised that my legs are still reasonable and that at my age, 65, I may not have many years left in which I would be able to cycle for a whole year.

Previous Biking Birder adventures have been to achieve various targets.

BB I - In 2010 I cycled around the UK in order to see every RSPB nature reserve and every W&WT centre. 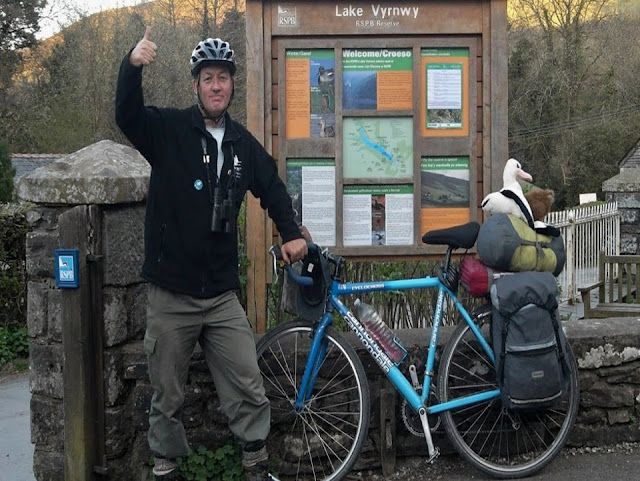 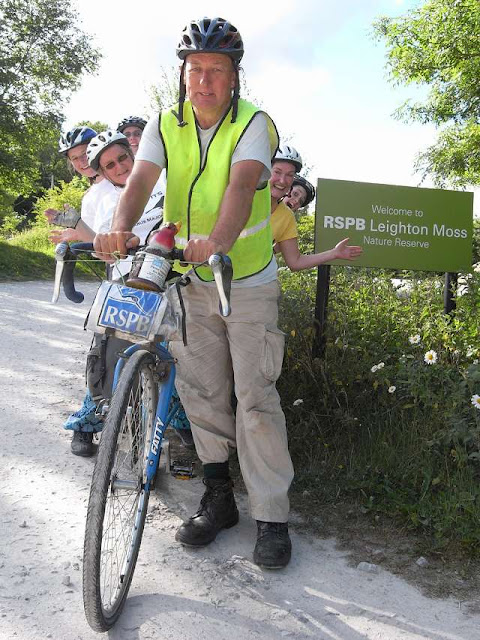 BB II 2015 - try to become the British BIGBY - Big Green Big Year - champion whilst still visiting every RSPB nature reserve and W&WT centre. A Big Green Big Year is a challenge where one birds and keeps a list of all bird species seen during a whole year but no fossil fuel transport is to be used. More on that aspect later. 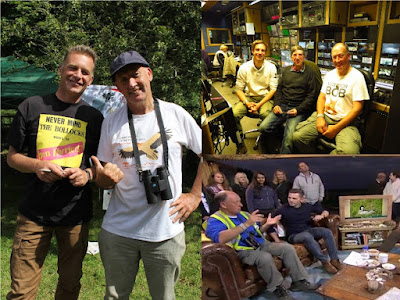 BB III 2016 - British BIGBY record broken, next target was the European BIGBY, held by Ponc Feliu Latorre of Catalonia, a year list total of 305 would be required to beat Ponc. 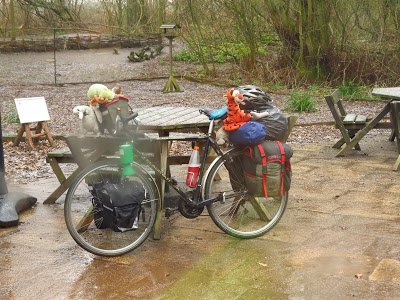 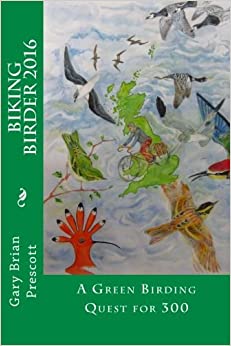 BB IV  2018 So with the European BIGBY record UTB, under the belt, why not go for the World record? Why not indeed but where?

Britain would not provide the number of bird species required to beat the incredible Green Birder, Dorian Anderson. Dorian had seen 618 bird species by cycling around the USA. More on that later.

My first idea was to do the same, that is cycle around USA and visit all of the Audubon nature reserves whilst doing so. I even bought a road atlas of the US and mapped a route! I still have it and who knows, one day maybe.

In 2013 though I had been to and fallen in love with Peru. I visited Peru again in 2014 travelled around for around three months. I was smitten. The country had everything I loved in life; nature in abundance and found amongst a wonderful diversity of biomes - oceanic, desert, montane and rainforest. Then there was the history with Machu Picchu being an ultimate destination, of course but not the only site of fascination. The people! Wonderful, friendly, colourful, fun-loving people. Everywhere I went I met such wonderful people, yes, Peru had the lot and I haven't even mentioned the frequent festivals and the music.

So the US trip was dropped and the destination for my Biking Birder IV adventure would be Peru. 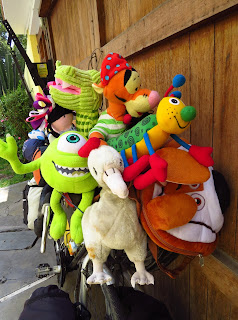 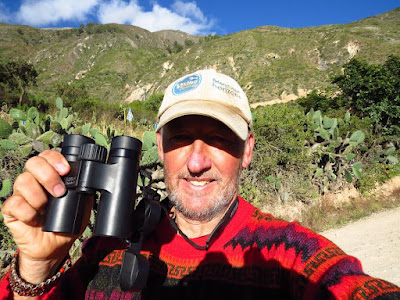 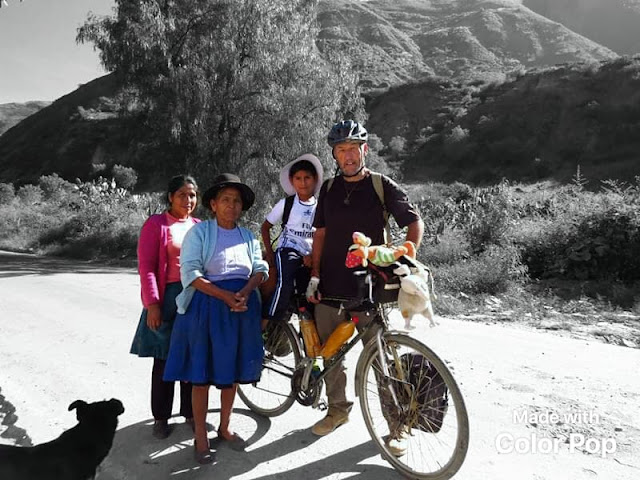 After a fabulous long weekend at the Ebro Delta Birding Festival with the fore-mentioned Ponc Feliu Latorre, the cycle back from south of Barcelona to Britain was stopped by a huge blowout of the back tyre when in the Pyrennean foothills. No replacement to the tyre could be found and all replacement inner tubes were quickly used up. I left the bike in a park beside a bench and took train, coach and ferry back to Britain. 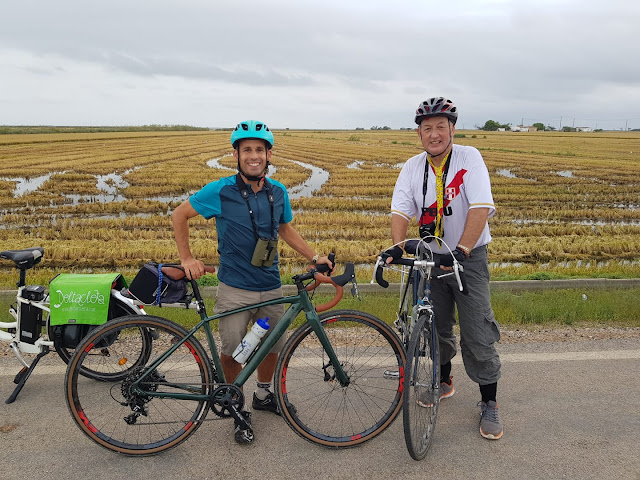 Which brings me to today and tomorrow I will be detailing my plans for 2022, the reasons behind my sixth Biking Birder adventure, BB VI and how you can all participate and help.

Posted by bikingbirder at 12:54 No comments: 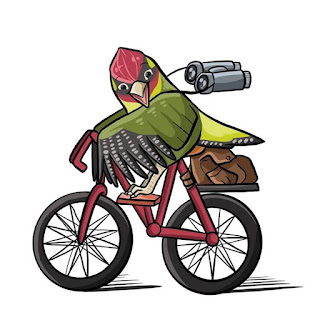 A New Year so a new focus for my birding year, with a wish that lots of people, be they birders or interested bird lovers, join in a Green Birding year.

No Biking Birder adventure in Peru this year. I will be staying in the UK. The main aim is to visit fifty favourite RSPB nature reserves and all ten Wildfowl & Wetland Trust centres. Travel will be by train to an area and then a time cycling around the RSPB and W&WT reserves around there. 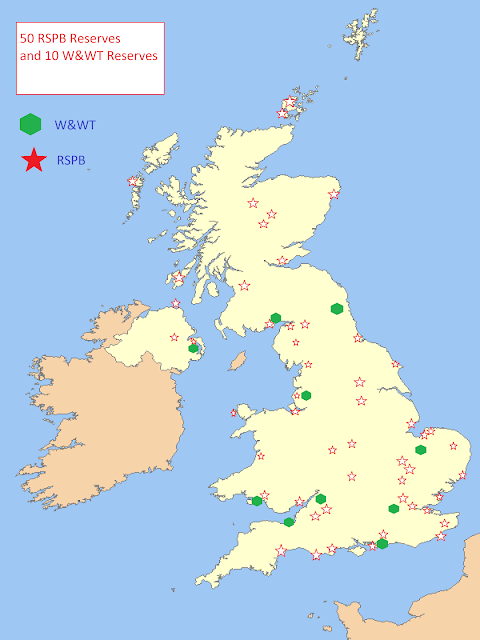 Green Birding Public Transport (GBPT) may be my main activity but I will also be Pure Green Birding with a study of my village, Romsley, in North Worcestershire. By walking and cycling I will record all the nature I find within the parish bounds and share it all with Romsley villagers. 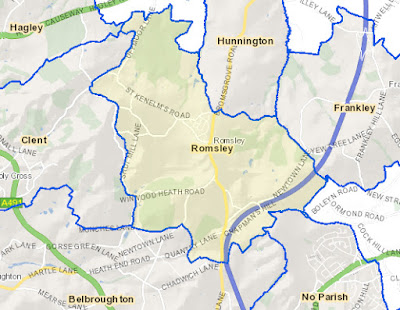 To do so there are a two Romsley Facebook group pages to post on and I will be visiting a superb Care Home, Yew Tree, as they have started a nature project there. Bird tables, nest boxes, wildlife garden flower beds and excellent information boards have all been put in place there to enhance the wildlife that visits the large garden and increase the enjoyment of the residents. (GBLW and GBLC)

Another Green Birding category that everyone can join in with is Garden Birding. My garden, well Mum and Dad’s really as I don’t have a home myself, is a small one that backs onto a steep slope covered by Oak trees. The view from the back window of the lounge looks straight out into the canopy and therefore the birds that come to the bird tables and bird feeders reflect the woodland birds to be found in our area; Blue, Great, Coal and Long-tailed Tits, Chaffinch, Bullfinch and Goldfinch, Nuthatch, Wood Pigeon and Stock Doves, Robin, Dunnock, Goldcrest, Wrens and Great-spotted Woodpeckers. 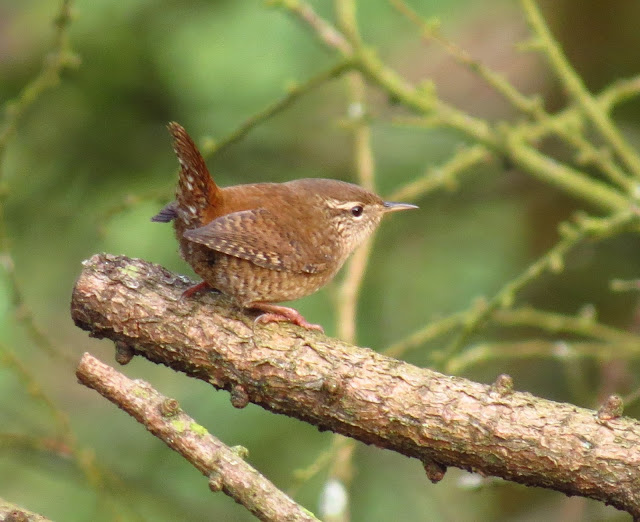 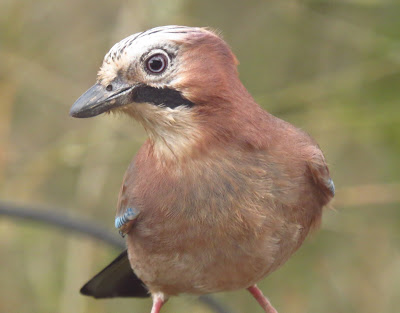 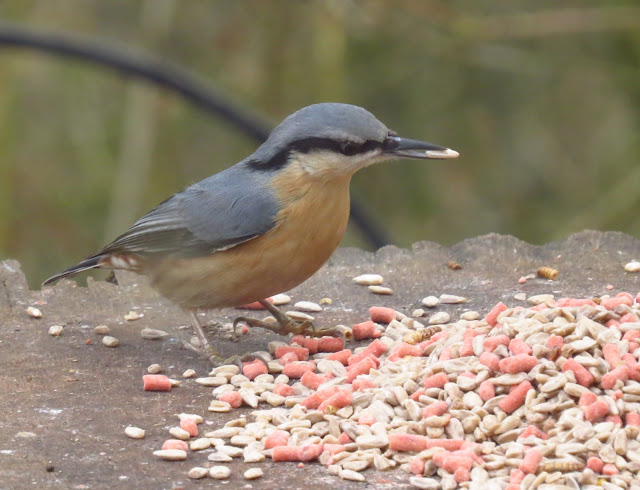 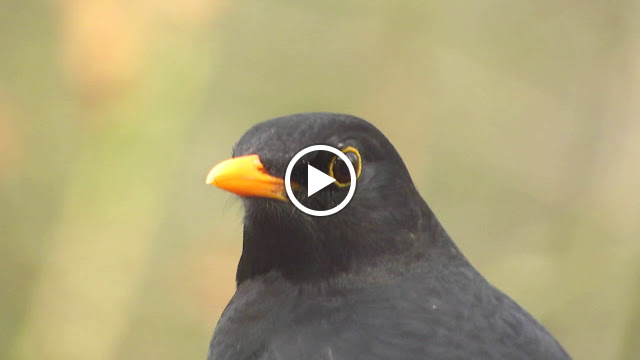 Over the year, every time I visit my parents, I will record what birds I see in the garden and also in the gardens of neighbours on the estate. I am particularly interested in seeing what different bird feeding opportunities neighbours have for their visiting garden birds; what foods they put out and what feeders and bird tables they have.

During the year all my records will be placed in Bubo Listing. Bubo gives one the opportunity of creating a list with date, location and notes on sighting. 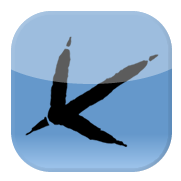 https://bto.org/our-science/projects/gbw
To give more precise details I will place records on the BTO’s Birdtrack. (British Trust for Ornithology) and their Garden Birdwatch site. 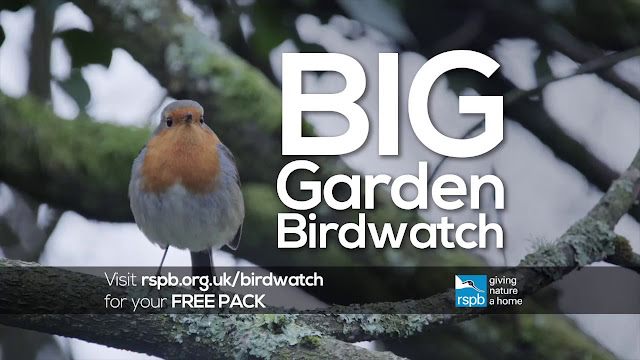 Speaking of Garden Birdwatch, the weekend of the 25 to 27th of January has the immense RSPB Garden Birdwatch. The World’s largest wildlife survey, hundreds of thousands of RSPB members, well there are over a million members, have for forty years faithfully recorded what birds they have seen in their gardens. The results have shown declines in some bird species; 77% decline with Song Thrush for instance and some increases; Bramblings and Bullfinches being noted in larger numbers. 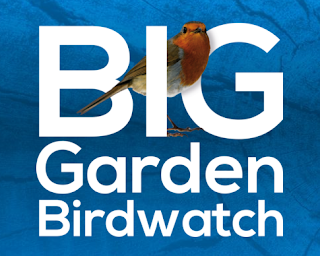 I hope to carry out this survey in five different gardens in the village and hope other villagers will also do so and share their experiences on the Romsley Facebook pages.

Finally when it comes to recording sightings, I will place all on eBird, the international online database for bird sightings around the World. 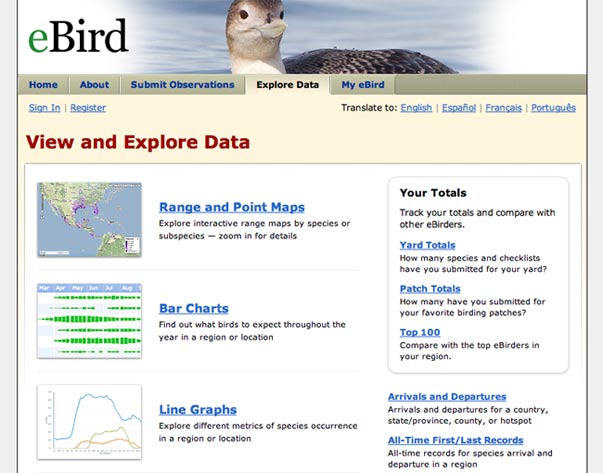 So, will you join us? Here is a list of possible Green Birding scenarios for you to peruse and consider.

If you are a Green Birder, or want to become one, then please take a look at the Facebook group, Green Birding Megastars. It doesn’t matter how experienced you are as a birder or where you choose to bird. Beginners to experts can be Green Birders and all can share experiences and thoughts, comment, post photographs of birds seen and send details of their lists and records on the group pages and I hope that membership will grow and reflect the changing nature of how we all relate to the birds we love. So please, come and join us all and be a Green Birding Megastar.

Green Birding to me is a way of life. Every aspect of my life, be it diet, clothing, housing, transport, recycling or energy use, has been carefully thought about with the aim to be as environmentally friendly as possible. It would be wonderful to hear from you and even better to hear that you either are a Green Birder or want to become a Green Birder. 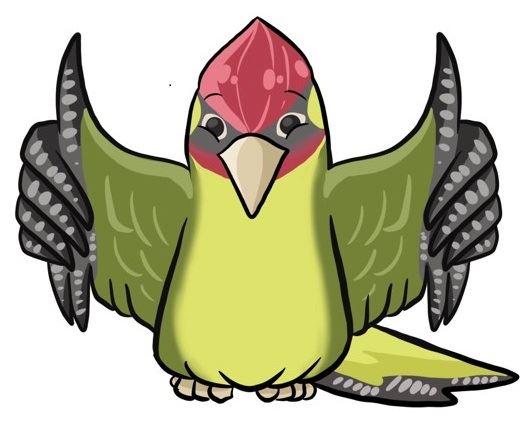 Posted by bikingbirder at 20:29 No comments: 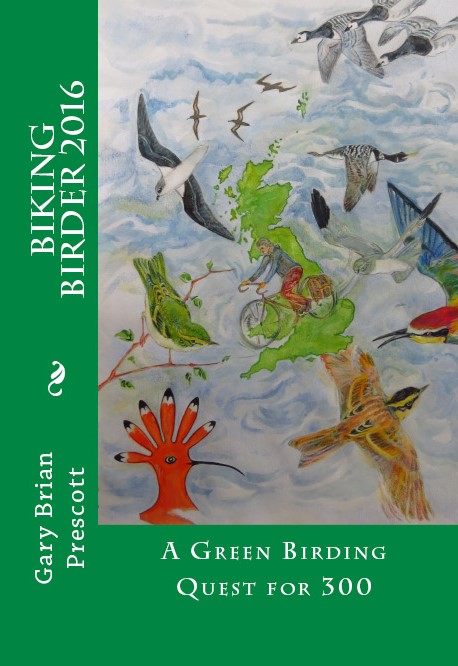 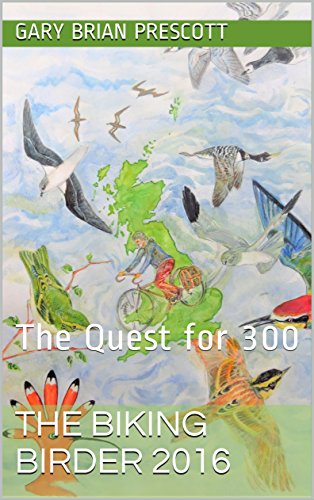 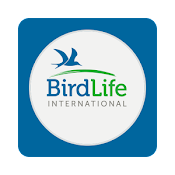 Donations very much appreciated given for Birdlife International by :